The life and work of Georgette Heyer

published in 2011. Subtitled The Biography of a Bestseller, it’s a fascinating look at the life of an extraordinary writer or ‘publishing phenomenon’, as the phrase often used of bestselling writers has it. Here are five of our favourite facts about Georgette Heyer’s life and work, several of which we learnt from reading Kloester’s book.

1. Georgette Heyer’s earliest stories were written to cheer up her brother, Boris. Boris was haemophiliac and Georgette – the family surname is pronounced ‘hair’ rather than ‘hay-er’ – came up with her earliest forays into fiction as a way of entertaining him. 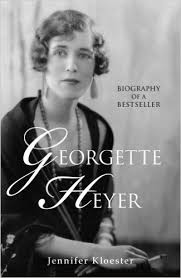 father who encouraged her to publish the novel which a precocious young Heyer had written when she was just seventeen. She was something of a ‘method’ writer: she sometimes wrote with an eighteenth-century quill pen as if to create a physical connection between herself and the period about which she was writing.

3. Heyer also wrote detective novels. Beginning in 1933 with the gloriously titled Why Shoot a Butler? Heyer carved out a secondary career as a mystery novelist, alongside her hugely popular Georgian and Regency romances.

4. Her fans include Stephen Fry and A. S. Byatt. She herself had few kind words to say about Barbara Cartland, allegedly branding her fellow author a ‘petty thief’, according to this Guardian article.

5. She sold millions of books, but Georgette Heyer went her whole life without giving a single interview. Indeed, many of her friends had no idea that Mrs Rougier – the married name by which she was known socially – was the famous Georgette Heyer, author of bestselling romance novels. She disliked publicity and she and her husband, Ronald Rougier, lived in a very expensive and rather secluded apartment in Piccadilly (her novels made her a wealthy woman), but she didn’t live the ‘author’s life’ – apart, that is, from getting on with the key business of the actual writing. She didn’t go on book tours or signings or give interviews, and didn’t mix with other writers, either.

For more about Heyer’s fascinating life, we strongly recommend getting hold of a copy of Jennifer Kloester’s Georgette Heyer Biography.