1. He has been hailed as one of the four most important novelists of his age. Influential literary critic Harold Bloom, author of The Western Canon

, has declared that McCarthy is one of the four major novelists of his time, the others being White Noise author Don DeLillo, Gravity’s Rainbow author Thomas Pynchon, and Portnoy’s Complaint author Philip Roth. Bloom has even said that McCarthy’s 1985 novel Blood Meridian is the ‘best single book since Faulkner’s As I Lay Dying‘. (We have more about William Faulkner here.)

2. McCarthy sent his first novel to the publisher Random House – because they were the only one he’d heard of. McCarthy has claimed that he sent his 1965 debut novel The Orchard Keeper to this publishing 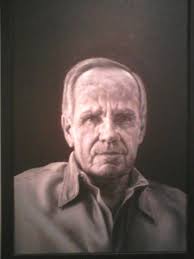 house by default. McCarthy would subsequently be edited by the man who had edited William Faulkner’s work, prior to Faulkner’s death in 1962.

3. Unusually for a novelist even then, for most of his career Cormac McCarthy didn’t have an agent. His books sold in small quantities but none exceeded sales of 5,000 in the initial hardcover release.

4. Indeed, McCarthy didn’t give his first TV interview until 2007, over forty years after he sent off his debut novel to Random House. In 2007, McCarthy – who generally keeps out of the limelight – agreed to be interviewed by Oprah Winfrey in the library of the Santa Fe Institute. This was one year after his novel The Road had been published, a novel that Oprah had chosen for her influential Book Club.

5. One of his most popular novels, The Road, was inspired by a journey he made with his own son. The idea for The Road came to McCarthy in 2003 while he was on a visit to El Paso, Texas with his son, and McCarthy began to imagine what the city – and the world – might look like a hundred years in the future. George Monbiot has called McCarthy’s 2006 novel The Road ‘the most important environmental book ever’ because it ‘shows that everything we value depends on the ecosystem’, but in many ways The Road is a mirror for the reader, who finds whatever preoccupations most exercise their imagination – war, climate change, natural disaster – within McCarthy’s considered and ambiguous prose parable.

Image: Portrait of Cormac McCarthy by Wel Tchou, via Flickr.